Created in 1989 by Gérard Bekerman, professor of economics at the university and a graduate of the Paris School of Music, the International Competition for Outstanding Piano Amateurs® is designed for top level amateurs. They come from all walks of life – doctors, office workers, lawyers, students, pensioners, engineers, and many others. 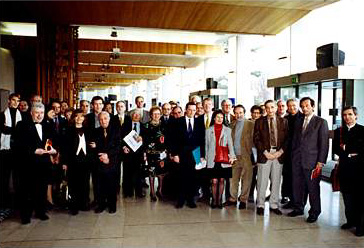 A second “press panel” consists of more than twenty music critics representing both the main European dailies and the national and international media. All contribute to promoting the International Competition for Outstanding Piano Amateurs.

This unique Competition has met with considerable success over the years, attracting hundreds of candidates from 50 countries worldwide. They love to meet in Paris in the congenial atmosphere of piano enthusiasts from every corner of the globe. One of the basic principles of the Competition is the free choice of programme. There are no set pieces. The aim is not to limit the candidates, but to discover the works of musicians of their own choosing. The winners have been invited to play with orchestral backing in the Sorbonne in Paris, under the baton of Georges Prêtre and the American conductor George Pehlivanian and, more recently, with the Symphony Orchestra of the Republican Guard of Paris directed by François Boulanger and the orchestra of the Paris Conservatorium of Music conducted by Pierre-Michel Durand.

The originality of the Competition lies in the fact that the competitors are not amateurs in the sense of “dabblers”, but pianists, “who don’t just play the piano”, musicians who, at some time in their lives, have had to make a choice, often a difficult one, between their profession and their potential career as a concert performer, the choice between making a living and their love of music.

The Competition is organized every year in Paris. The next finals will be held on Saturday March 23, 2019 at 5 PM, under the sponsorship of the Ministry of Culture and BNP Paribas Investment Partners and with the partnership of France’s leading radio station for classical music, Radio Classique, which will be broadcasting the finals. The Association has over 20,000 sympathizers and friends. The Concours is always delighted to welcome candidates from the US.

It is with great pleasure that we are presenting the International Competition for Outstanding Piano Amateurs today. The competition has certainly lived up to its international vocation, attracting more than a thousand candidates from throughout the world since its creation in 1989. What could motivate a doctor or a lawyer or an office clerk from California, or Peru or Azerbaijan to travel across an entire continent just to come and play the piano for a few minutes in Paris? Simply their wish to participate with other people who share the same language, in an event which is quite unique in the international music world.

We could even say that the International Competition for Outstanding Piano Amateurs, or Concours, is an “anti-competition”. Here, there is no place for competitiveness and still less, for rivalry. In music, like in any art, the notion of “best” may mean something for the short space of a competition, but it is of little significance afterwards and the candidates’ only “opponents” are probably themselves.

The Competition for Outstanding Piano Amateurs: an anti-competition

We have continued to develop this congenial spirit since the outset, not only among the candidates, but also between the candidates and the judges, gradually establishing the idea of “side-by-side” rather than “face-to-face”. The Concours has sought to facilitate contacts between the judges, the press and the candidates as much as possible, even during the actual competition, sometimes suggesting to pianists that they ask the jury for advice in order to give their very best on the day of the finals or during the preliminaries. Two candidates spring to mind – the prize-winner who was taken up to see Georgy Gziffra in Senlis two or three days before the finals, to put the finishing touches on Liszt’s Sonata, and a German doctor, who also benefited from last-minute advice from a judge. In any other circumstances, the jury would have been taxed with favouritism, but here, the individual candidates’ well-being could only contribute to everyone’s pleasure.

To put across this unusual philosophy, we need a panel of judges who are known to be fair and upright. We have never been disappointed. To quote Eugène Delacroix, France’s greatest Romantic painter, in 1831*, we need to “find judges, judges without passion or prejudice, who will not be tempted to prefer their friends to everyone else, and whose only aim is justice and the good of art”.

One of the Competition’s most faithful members has, without doubt, been Mrs Arthur Rubinstein. Closely associated with our competition since 1989, she has offered unflagging encouragement and support, and been a regular member of the jury. Her presence at our side has been continuous and always enthusiastic. “Arthur would have liked it”, she once confided in me.

This spirit of harmony and understanding, contentment and sympathy among candidates and jury alike has been promoted by the Competition for Outstanding Piano Amateurs with such success that, one year, we even thought the jury might deliberate in public. Certain members however – no doubt they were right from their point of view – were against it. Or simply considered fairness to be a question of discretion. Friendships obviously develop both during and after the Competition and continue to blossom many years later, which is particularly remarkable when we consider that some of the candidates would, at some time, have liked to be the best or one of the best. I would like to add that, in any profession, skills and knowledge, aided by experience, are built up gradually, but a musician is often in a permanent state of self-questioning, like a spring that dries up with time, faced with a continual loss of technique, capability and know-how; a piece played just a year before is almost a thing of the past, yet a doctor, or so we hope, loses nothing of the art and knowledge acquired over the years.

A jury of well-known pianists

An impressive number of pianists have spontaneously agreed to join our panel of judges. The list is impressive! Unanimity of the judges’ vote, the audience’s vote and the press vote has been the rule, disagreement the exception. The Competition is proud to have welcomed pianists who had every reason to be absent on the date we asked them to join our jury – busy with tours, concerts, pupils or simply a Sunday off. Yet, all those we asked accepted the invitation and many have become faithful members of the jury – which goes to show that music doesn’t necessarily frighten them away. I’m thinking of performers such as Laforêt, Duchâble, Queffelec, Beroff, Boukov and Weissenberg or renowned teachers from CNSM, the French national conservatory of music, such as Sabine Lacoarret and Germaine Devèze.

The Press panel: forty music critics from throughout the world

The press, though well-disposed to the critic’s art, has actively supported the promotion of our event worldwide. Often virulent when it comes to professionals, it has always been indulgent with our outstanding amateurs. Some three hundred and eighty press articles (and perhaps more we are unaware of) have paid tribute to the quality and unprecedented character of the Competition. Two articles, that we have already forgotten, have been otherwise conspicuous. We were particularly touched by the very first articles in “Le Républicain Lorrain”, “Les Dernières Nouvelles d’Alsace” and “Ouest-France”, all regional newspapers, and the more recent headlines in the American, German and Japanese press. Thanks to the people who wrote them, the Concours is now truly international and we are delighted to welcome candidates from across the globe every year.

Promoting the Competition of Outstanding Piano Amateurs would never have been possible without the support of partners such as Radio France and, today, Radio Classique, France 2 (Eve Ruggieri, a well-known figure on French cultural television, devoted two hours to the Competition in a TV programme seen by more than a million viewers, and presented the Concours on three occasions) and other sponsors from the financial community. The Concours is happy to inaugurate the third millennium with the active support of BNP Paribas Investment Partners. The French ministry of culture is a faithful sponsor of the competition, bestowing a “symbolic” subsidy each year, but we are aware that in terms of public finance, changes in budget allocations are somewhat difficult to achieve at the present.

The judges, the press and the sponsors may be indispensable to the International Competition of Outstanding Piano amateurs, but the candidates are its heart and soul.

The Concours has been delighted to offer the winners the best possible reward – to play in a concerto for piano and orchestra in Paris led by famous conductors (Georges Prêtre, George Pehlivanian, François Boulanger) in the prestigious main hall of the Sorbonne.

Today, the Concours has some 20,000 faithful friends and well-wishers in fifty countries – enough to fill the Théâtre des Champs Elysées or Carnegie Hall. It is always with great pleasure that we welcome them to Paris.

It is our modest ambition to continue in the same spirit, for the good of each and every one of us and, we hope, for the promotion of quality music.

No Result
View All Result